Diabetes – A Precursor for Infertility 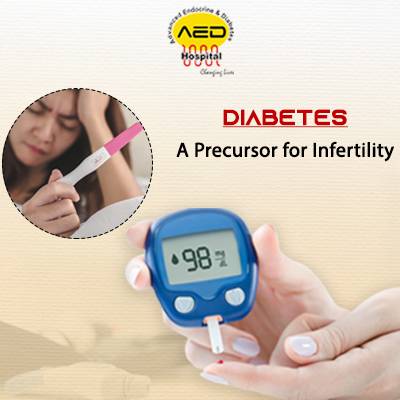 Diseases are so subtle, like diabetes and its precursors, for example, insulin resistance, which can greatly reduce the chances of having children. It is critical, especially if you're overweight or have a history of diabetes, to rule out or treat such diseases before beginning treatments.

It has been concurred by the medical community and the whole team of the best Diabetes Center in Kukatpally, Hyderabad agrees that diabetes is known to have an impact on the ability to conceive a baby. Diabetes is a precursor of infertility in both men and women, causing hormonal imbalance and hider the ability of the zygote to implant itself on the endometrium, and also damaging the DNA profiles.

How Come Diabetes Become A Precursor for Fertility?

Insulin - a glucose-absorbing hormone in the pancreas fruitfully manages blood glucose levels as per the body’s requirements, which is an essential energy requirement. If not, that person may notice signs or symptoms of impaired glucose tolerance/diabetes.

There are two types of diabetes type I where the pancreas does not produce enough insulin or if produced does not interact with the glucose molecules perfectly is type II. With a recorded estimation of more than 3% of the world’s population is affected by diabetes. Where Type I diabetes is increasing exponentially each year.

Recent experiences with the cases of the metabolic effects of type I diabetes mellitus and type II diabetes mellitus on the hypothalamus-pituitary-ovary (HPO) axis in the brain have proved a direct relationship between this diabetes and bearing a child, like the risk for conceiving successfully, and fecundity (gestation and obstetrics). The Diabetes Treatment in Kukatpally, Hyderabad at AED has reached its new heights and inculcates a few major complications that diabetes may bring along provoking infertility:

Typically, Type II diabetes occurs in women after the phase of menopause, but in modern society obesity is a mammoth concern with abnormal diet and lifestyle, emerging as a triple threat for women trying to conceive. Thus, raising concerns for a woman’s reproductory stage. Obesity is directly linked to PCOS, anovulation, and cystic ovaries showcasing insulin resistance, leading to lower levels of adiponectin hormone and thus reducing the levels of insulin and fat breakdown.

Your endocrinologist may recommend oral medications and/or insulin. Sometimes, additional therapies like liposuction may be suggested. For scenarios like this, hormone therapy for egg maturation is usually in combination with metformin is recommended. Metformin is a diabetes medication that increases the sensitivity of the body's cells to insulin and decreases insulin production in the liver. The Best Diabetes Specialist Doctors in Kukatpally, KPHB significantly vanishes such hindrances that prohibit you from getting pregnant.

For an individual plan created especially for you to get advice from AED, or for more details contact 9059600930 or visit https://www.aedhospital.com